Brand Finance attended Davos on Wednesday 18th January to launch our Global 500 2023 at an exclusive event hosted in association with Infosys as part of the World Economic Forum. At this exclusive event, we unveiled the findings of our 17th annual study on the world's 500 most valuable and strongest brands. We also hosted a panel discussion with global leaders on the topic "Great Innovation Makes Great Brands".

Attended by top brand leaders and media from around the world, we announced the world's most valuable brand this year and revealed the industry leaders. We discussed how the world’s brands have coped with the challenges following the COVID-19 pandemic and the rise in virtual collaboration. We also explored which brands are growing faster and which are struggling to advance. Looking ahead, we considered how innovation is key to driving economic growth and supporting sustainability efforts. 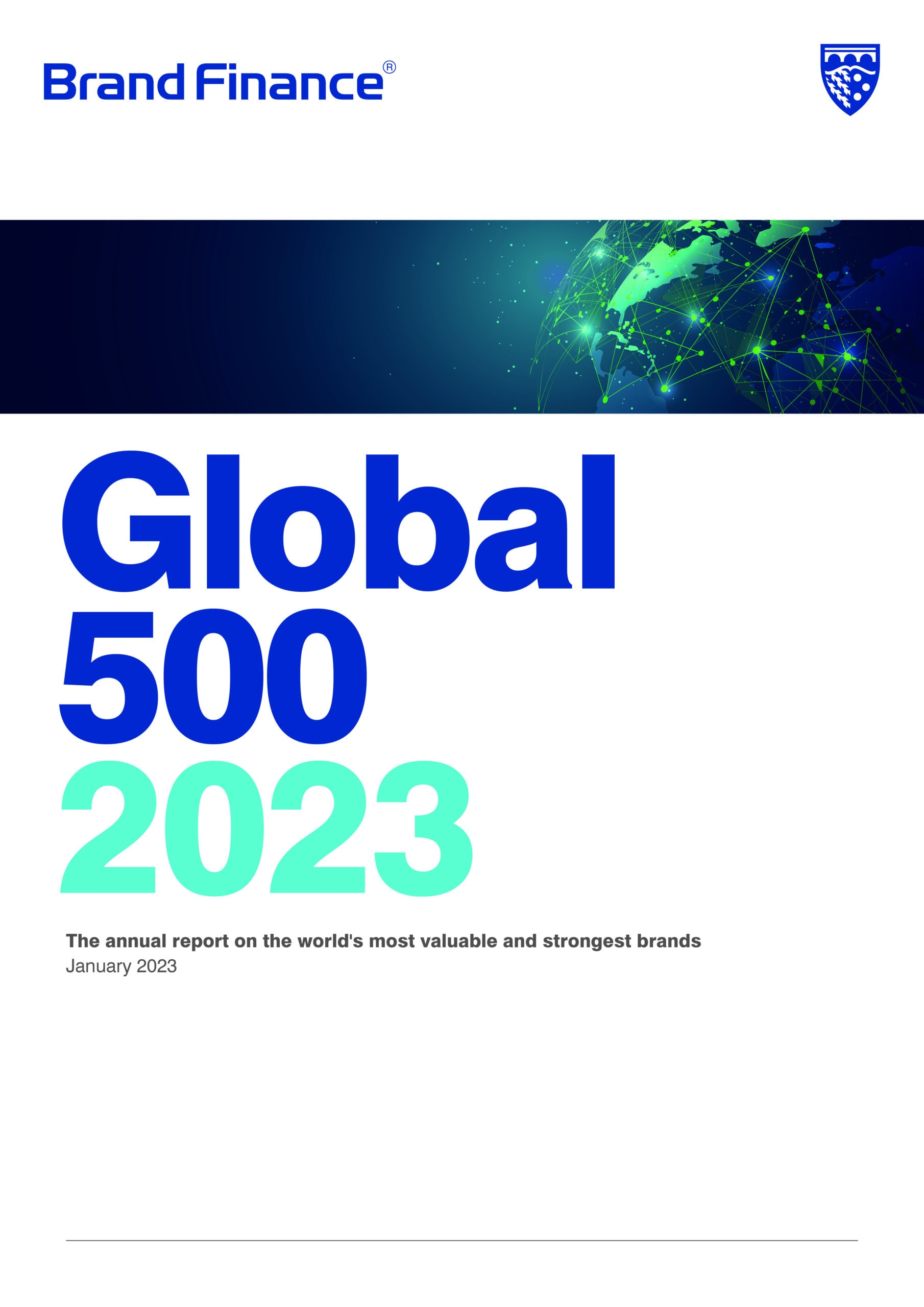 to be notified of future events

Infosys is a global leader in next-generation digital services and consulting. We enable clients in more than 50 countries to navigate their digital transformation.

With over four decades of experience in managing the systems and workings of global enterprises, we expertly steer our clients through their digital journey. We do it by enabling the enterprise with an AI-powered core that helps prioritize the execution of change. We also empower the business with agile digital at scale to deliver unprecedented levels of performance and customer delight. Our always-on learning agenda drives their continuous improvement through building and transferring digital skills, expertise, and ideas from our innovation ecosystem.

David is the Chairman and CEO of Brand Finance Plc – the world’s leading brand valuation consultancy. He has worked in the area of branded business, brand, and intangible asset valuation since 1991. He specialised entirely in the field after becoming the Director of Brand Valuation for Interbrand in 1995. He subsequently left Interbrand in 1996 to launch Brand Finance which is celebrating 25 years in business this year.

David represented the British Standards Institution in the working parties responsible for crafting international industry standards: ISO 10668 on Brand Valuation in 2010 and ISO 20671 on Brand Evaluation in 2019.

David is a passionate writer and has authored many articles on brand valuation, published in numerous marketing and finance newspapers and magazines, such as: Financial Times, Accountancy Age, and Marketing Week. He has also lectured on the topic of brand valuation for Harvard, Chicago, and London Business Schools.

Sumit heads marketing at Infosys and is responsible for realizing the Infosys brand ambitions globally. He joined Infosys in 2004 and has since held multiple strategic positions including the Head of Infosys Products & Platforms marketing as well as the Global Head of Corporate marketing. He champions marketing effectiveness and enjoys the challenge of building strong connects between marketing metrics and business outcomes. Sumit comes with over 19 years of experience in international marketing. Prior to joining Infosys, he has worked with Polaris Software and the Tata Group where he acquired his specialist skills in brand development, marketing communications and demand generation.

Hatem Dowidar is the Group CEO of e&. He joined the Group in September 2015 as Group Chief Operating Officer and was appointed as Chief Executive Officer, International in March 2016.

Ever since he took the company's helm, Dowidar has spearheaded several ground-breaking strategic programmes that propelled the company’s business growth to new heights across the 16 markets where it operates. As the company transformed into a global technology and investment conglomerate in February 2022, and despite the ever-changing business landscape, his astute brand stewardship has been the foundation for enhancing e&’s brand equity, enhancing employee experience, and adding value to stakeholders.

Today, e&’s portfolio of brands is among the most valuable in the region standing tall in global rankings. Dowidar also has been ranked 22nd in the Global Brand Guardians Index (BGI), up from 79th place in 2022 and has become 1st in the BGI Telecoms Ranking.

Under his guidance, the company is also recognised as the most valuable publicly-traded company and, according to Forbes, also the most valuable listed telecommunications service provider in the GCC region. A highly skilled strategist and visionary, Dowidar has been instrumental in ushering in a new phase of strategic partnerships and key collaborations with global industry leaders such as Microsoft and Meta that will digitally empower societies.

He initially joined Vodafone Egypt in 1999, served as Marketing Director (CMO) and later became the CEO of Vodafone Egypt from 2009 - 2014, where he steered the business growth with benchmark profitability in challenging and competitive environments.

Dowidar has a long track record of achievements in the various leadership positions he held at Vodafone Group and its subsidiaries, including Group Core Services Director, Chairman and CEO of Vodafone Malta, CEO of Partner Markets with partnerships covering over 45 markets and Regional Director Emerging Markets. He also has extensive Corporate Governance experience through his representation as Chairman and Board Member in several Corporate Boards within and outside the telecommunications industry.

Dowidar began his career in AEG/Deutsche Aerospace (Daimler Benz Group) in Egypt, before moving into marketing at Procter & Gamble, where he held several managerial roles.

He is currently a board member of Etihad Etisalat Company (Mobily), Maroc Telecom, Etisalat Misr (Etisalat Egypt), Pakistan Telecommunications Company (PTCL), Abu Dhabi Chamber of Commerce & Industry and in the board of trustees of Khalifa University.

On a global industry level, Dowidar is a member of the GSMA , United Nations and the Internet Governance Forum (IGF) leadership panel. GSMA is an industry organisation representing the interests of global mobile operators as well as the broader mobile ecosystem. IGF leadership panel is a multi-stakeholder group for policies and practices relating to the Internet and technologies. Convened by the Secretary-General of the United Nations, the IGF facilitates knowledge exchange on how to maximise Internet opportunities and address risks and challenges. Since its foundation, the IGF has identified a wide range of key issues to be addressed by the international community and has shaped policy decisions related to the Internet and technologies throughout the world. He is also the only Arab member from the MENA region on the Leadership panel, which currently consists of 15 members.

He has a Bachelor’s Degree in Communications and Electronics Engineering from Cairo University and an MBA from the American University in Cairo.

Kanika Pal is an award-winning CSR and sustainability professional with over 17 years of experience, presently heading sustainability for Unilever South Asia.

She holds a master's degree in CSR from Asian Institute of Technology (AIT), Thailand and an advance management in public policy from Indian School of Business.

A TEDx speaker, she quit the corporate sector from 2015–17 and founded Solutions for Clean and Healthy Environment or SoCHE Foundation, to influence behaviour change for a cleaner planet. She has deep passion to understand the inter-connectedness between conserving the environment, enhancing livelihoods and improving the health of people and thereby enable creation of sustainable communities and businesses.

Awarded ‘Global Women in Leadership Award 2022’, ‘Asia’s Top Sustainability Superwomen 2020’, she is also the recipient of ‘Most Influential Sustainability Leader’ and ‘Wommenovator’ citations in 2018, among others. She is a LEAD Fellow, an alumnus of South Asia Leaders programme by Common Purpose, UK and a member of USAID's SAWIE - South Asia Women in Energy.

She has also been a working group member with World Economic Forum and has contributed to the recently published report on Unlocking Social Economy, released at Davos in 2022.

Infosys is a global leader in next-generation digital services and consulting. We enable clients in more than 50 countries to navigate their digital transformation.

With over four decades of experience in managing the systems and workings of global enterprises, we expertly steer our clients through their digital journey. We do it by enabling the enterprise with an AI-powered core that helps prioritize the execution of change. We also empower the business with agile digital at scale to deliver unprecedented levels of performance and customer delight. Our always-on learning agenda drives their continuous improvement through building and transferring digital skills, expertise, and ideas from our innovation ecosystem.

To receive updates about new releases, events and offers.