This article was originally published in the Brand Finance GIFT™ 2021 report.

At the International Valuation Standards Council (IVSC), our mission is to develop and propagate a truly global set of valuation standards to the benefit of the capital markets and all its stakeholders. Consistent with this mission we also explore certain emerging issues which we believe are systemic impediments to our valuation profession stakeholders and also to the capital markets at large.

We do so through thought leadership research and publications, stakeholder engagement, and sharing our perspectives via public meetings, and webinars. Recently we have begun work on an issue of great importance, exploring the need and opportunities for financial reporting standards to better align with the role of intangible assets in the modern economy.

Intangible assets have long been the engine for value creation in the world’s developed economies. The investment in intangible assets, both internally generated and through acquisition, is critical to an enterprises’ capital allocation process. Similarly, investors’ ability to identify those enterprises best able to translate such investments into long-term returns is equally as critical.

Brand Finance has been lobbying for greater intangible asset disclosure for about 20 years now. The IVSC supports Brand Finance, and all others, that look to make progress on this most critical issue.

The Case for Realigning Reporting Standards with Modern Value Creation

Despite the importance of intangible assets to the capital markets, only a small percentage are recognised on balance sheets, typically via acquisition from a third-party transaction. As many current business models have evolved over decades, namely, to rely more heavily on intangible assets at the expense of tangible, the standards to report on such activity have not. As a result, the economics and the reporting standards have become misaligned.

This misalignment has ripple effects through the financial statements. In the income statement, immediate expensing ignores the matching principle that governs nearly all other enterprise activities. In reaction, many companies choose to communicate various Non-GAAP measures that adjust for such activity. Additionally, failure to recognise internally generated intangibles means that such investments are largely excluded from the governance, financial reporting, and auditing ecosystems. Therefore, such investments are less likely to have corresponding disclosures or be included in the management discussion and analysis (MD&A), and therefore less likely to receive scrutiny from auditors or be visible to investors.

There are also practical implications for specific accounting standards, none more obvious than the disconnect between acquired intangible assets and certain internally-developed intangible assets. This disconnect permeates through the impairment testing processes as well, as acquired goodwill and intangibles can be shielded from impairment write downs by internally-developed goodwill and intangibles that are not reflected on the balance sheet1. All told, such limitations have caused many to question the relevance of financial statements in the modern economy2. For example, in The End of Accounting and the Path Forward for Investors and Managers the authors, Baruch Lev and Feng Gu, examined the explanatory power of reported earnings and book value for market value between 1950 and 2013. Lev and Gu found that the R2 (i.e., the explanatory power of reported earnings and book value on market value) declined from approximately 90% to 50% over the period3.

Beginning in 2020, the pandemic acted to further accelerate this long-standing trend, particularly for those industries most reliant on intangible value creation, as it has fundamentally changed how people live and work 5. An excerpt from a recent analysis that looked at 24 separate industries shows that market values have increased more from February 2020 to May 2021 for those companies which already had the highest market value to book value multiples. To show the acceleration of the trend in 2020 and 2021, the below graph displays the price to book value for the top 6 performing industries and the bottom 6 performing industries.

This confirms that the pandemic has further exacerbated the disparity between market values and book values for those industries most reliant on brands, technology, and human capital for value creation. The IVSC supports Brand Finance, and all others, that look to make progress on this most critical issue. 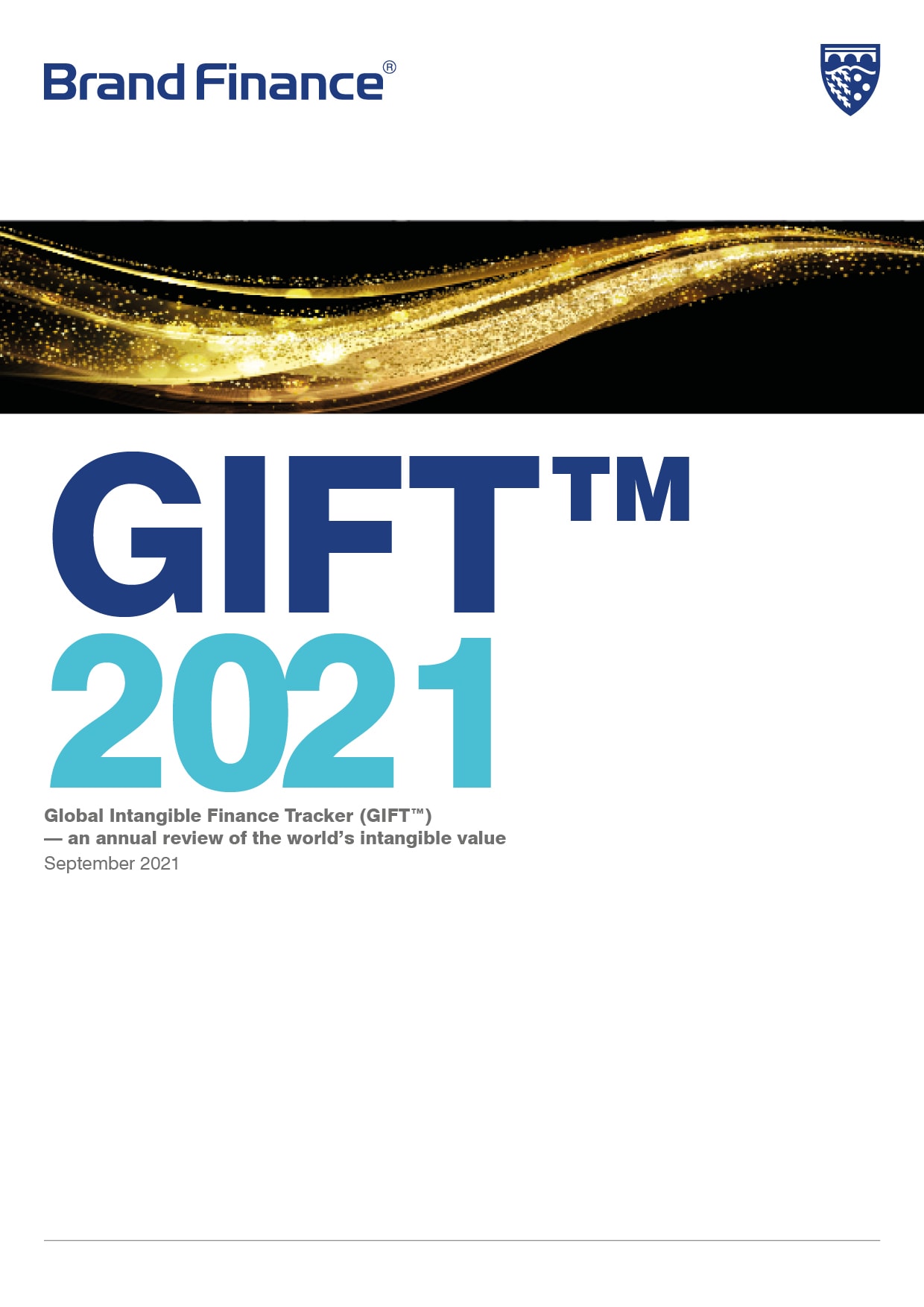 Download the annual report on the world's intangible value.

A deep dive into the Singaporean brand landscape

Brand Strength Index™: Creating a scorecard for your brand

How Decreto Agosto has changed accounting and financial reporting in Italy

Our Vision for Improving Brand Valuation

How We Value the Brands in Our Annual Rankings

Why Should I Value My Brand? 6 Strategic Applications for Brand Valuation